In one of our first encounters with Howardena Pindell, she intimated that there ought to be a show about her practice comprised of works with skeletons and bones. We understood her desire immediately, given that in our first foray into organizing Pindell’s work for this major exhibition, we considered bookending the project between an early still life of a skeleton (1967; fig. 1) and a more recent installation entitled Hunger: The Color of Bones (2014; fig. 2).1 Even for those intimately familiar with the work, “bones-as-motif” may seem a stretch; however, a quick examination of her oeuvre reveals thematic symmetries. While in graduate school at Yale University, Pindell acquired a human skeleton that became a study object for still-life paintings, color studies, and sketches. And, while her work focused on abstract forms after the completion of her MFA, we suspect that there are many other works that feature the same skeletal form and subject matter prior to graduation and in the period between Yale and the 1980s, when the figure reemerges. The human skeleton appears again in the 1990s antiwar Video Drawings as well as in Hunger: The Color of Bones, a multimedia installation protesting conflict-induced famine (indeed, the idea of Pindell as an “installation artist” may also surprise many). This time, however, the skeleton is not an object for formal study; Pindell presents it, rather, as the literal and material result of preventable death, as shock against apathy. In the twenty-first century, the artist returns to a form she first discovered fifty years earlier. 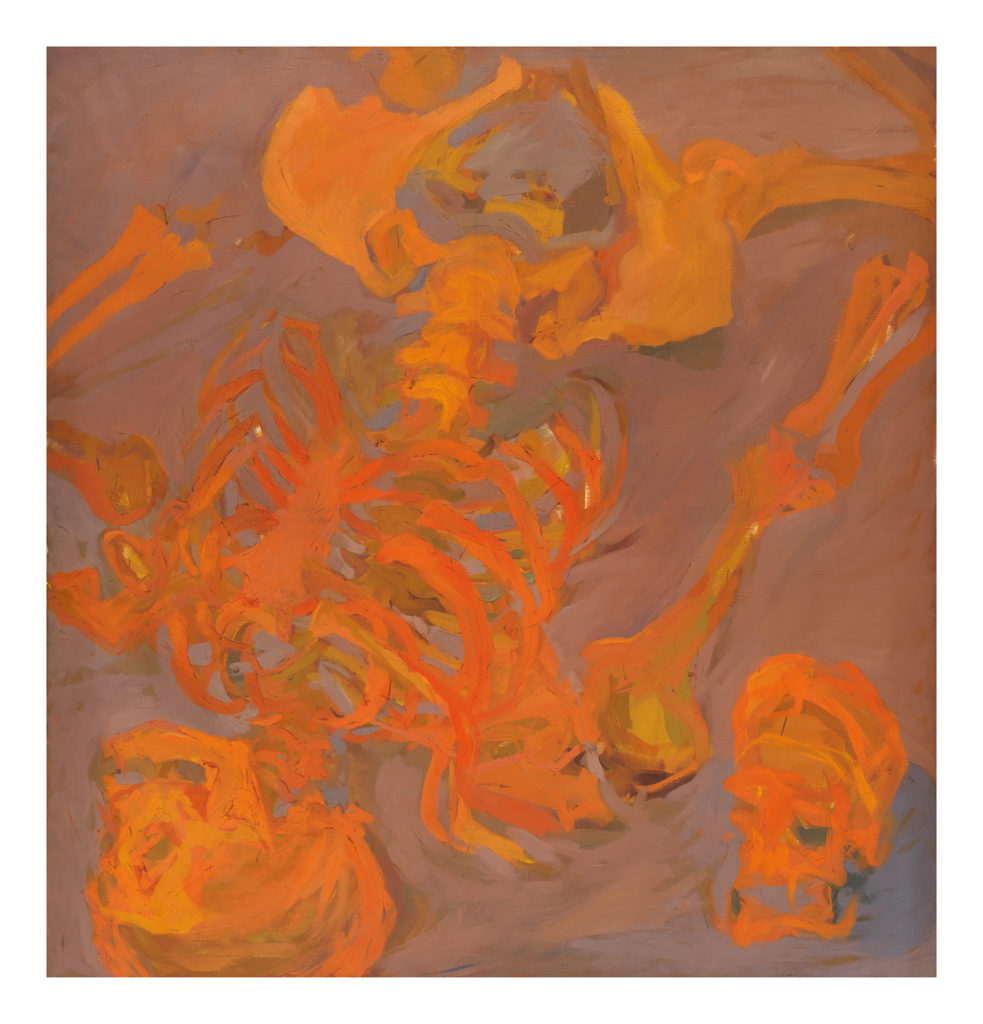 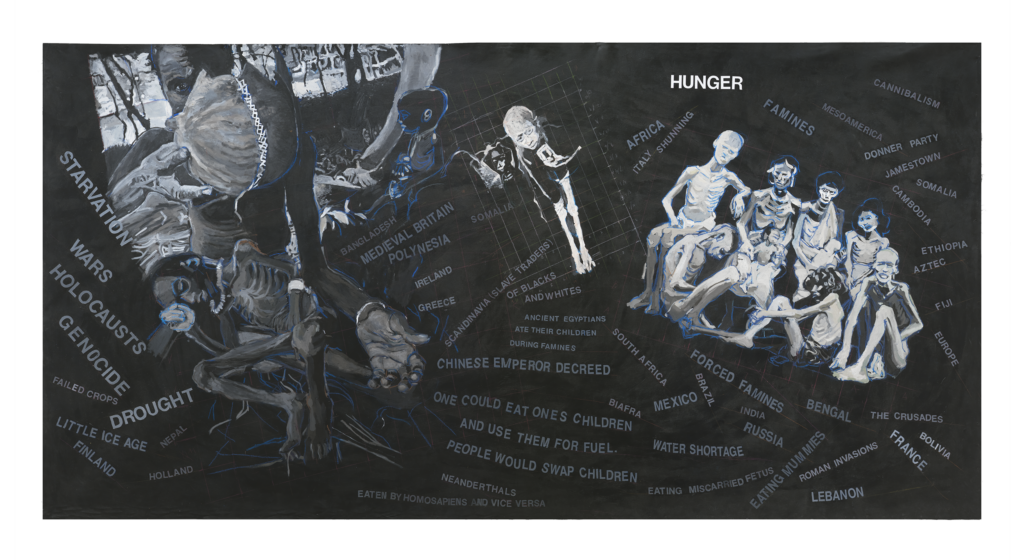 After the advent of “modernism,” the story of Western art in general and of most artists’ creative output has been presented as one of epiphany and rupture. Pindell’s career, conversely, builds upon a series of material innovations that appear in the present, as much as past memories become the thematic of current work. In other words, things cycle back around in Pindell’s work in a fashion not unlike the spiral forms seen in her recent shaped canvases (figs. 3, 4). As such, we faced a paradox: How to take Pindell’s offhanded idea of an exhibition of “bones” at face value? How could we think of her decades-long career less as a linear trajectory and more as a parabolic construct with recurring devices that continue into the present? Furthermore, how could we weave into this construct of Pindell’s multifaceted career the parallel strands—political and otherwise—that encompass a prolific studio practice, her life as an activist, a curatorial career, her copious writings and scholarly pursuits, as well as a long-standing teaching career? 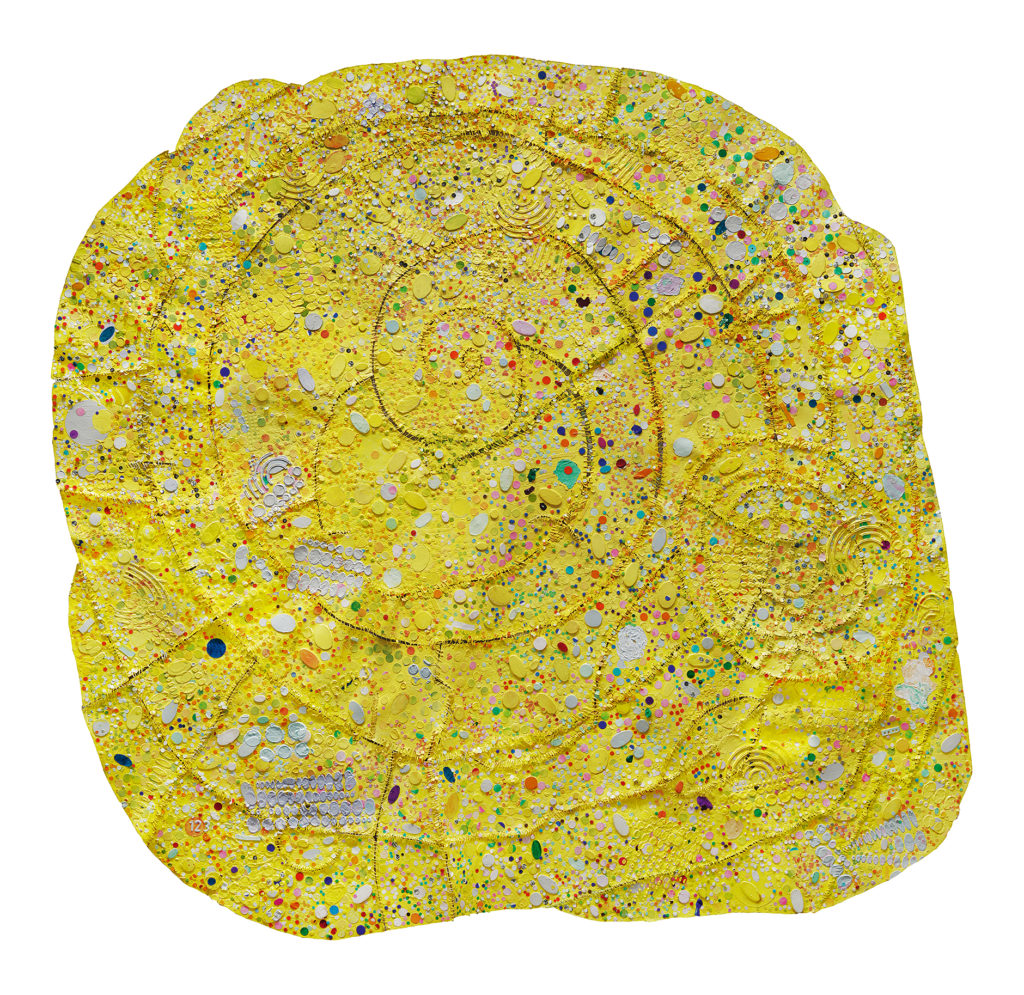 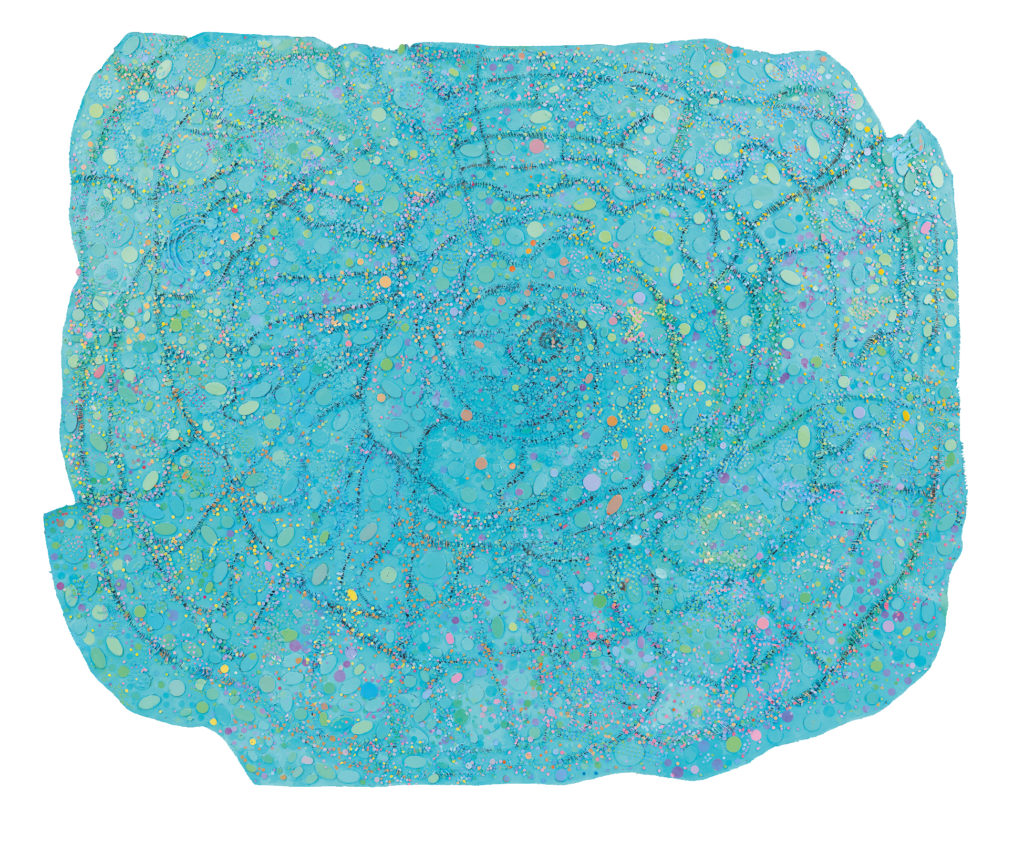 When we first conceived of What Remains To Be Seen, we knew that we needed to traverse the eras known as the modern and the postmodern, as Pindell’s education and career do. It makes for an interesting curatorial conundrum—one that compels a bifurcated approach to a career. First, we consider the early work in a chronological fashion and via formal and material experimentation and second, via the themes Pindell used as guiding concepts and concerns. Her best-known material experiments—the scintillating collaged canvases challenging the proposition that a painting must be made specifically by the action of painting, that is, by applying pigment to canvas with a brush—already presage the artist’s intuitive moves past modernism. Indeed, the stages of Pindell’s career mirror shifts in the US art world in the late 1960s. As the painterly New York School of her Yale professors was waning, several tendencies—each with its own geographic and psychographic home—arose in its wake: the hardedge abstract expressionism of William T. Williams, Al Loving, and Jack Whitten as well as the postminimalism of Eva Hesse, all while Lucy Lippard was supporting feminist practices and theorizing the conceptual art movement. Pindell, whose life and work took her from the top to the bottom of Manhattan, could traverse all of these tendencies, synthesizing their innovations as she saw fit. After 1979, a self-professed watershed year for Pindell, we examine the later works via concept, content, and theme, or, rather, postmodern modes of contextualization. This is necessitated both by a shift in material and conceptual content in the work and by Pindell’s own assertion that, by the late 1970s, she needed to tell her story inside the art practice. In other words, the artworks take on a narrative dimension propelled by a social and political urgency. This placed her in direct contraposition to artists such as Larry Poons and Ad Reinhardt, who Pindell admired even as they wistfully advocated a “pure” art unencumbered by either politics or academic theory. Many artists in the 1960s and later, including Reinhardt, were politically active in the social sphere but created fully abstract art that did not “reflect” their political sympathies. Pindell was among the first wave of academically trained artists to dismiss this separation and assert that the pressures, prejudices, and exclusions placed upon her—as a black artist and as a woman—played out as much in the art world as they did in the greater social world and, as such, were fair and necessary content for her art practice.

While her early 1970s canvases were met with art-world acclaim at the time (and are having something of a renaissance now), the post-1979 work was supported primarily by feminists and African American theorists. This made for two parallel conversations around her practice, one formal and one contextual. As critical theorists attempted to think through the burgeoning conceptual frameworks of politics-as-aesthetics and vice versa, the formalist properties of her work were neglected. In that leap from formal analysis to subjectivity deconstruction, responses to Pindell’s work have failed to account for the moments in which she makes the greatest leaps in innovation and where her work appears most singular. How and when new forms and unconventional materials emerge remain a mystery of sorts. There is very little by way of explanation of how paper pieces appear on the surface of a painting. There is even less discussion of the effects of other materials and formal choices such as ink, glitter, powder, perfume, jewelry, thread, nails, sequins, text, and photographs on stenciled bodily outlines and shaped canvases. While our project may not completely answer how and why these materials came to be part of a painter’s practice, it still poses the question: How can we approach a fuller understanding of Pindell’s formal innovations from our current vantage point? And most importantly, how do those formal innovations extend into a mode of rethinking the social and political context of their making? Rather than the opposite, which is to assume a specific causality between social and political upheavals that would necessarily produce certain art forms (though abstraction is currently being examined as a strategy toward these ends) (fig. 5).

The essays in this volume make an attempt to create a context for not only Pindell’s body of work—which, as captivating as it is, is always somewhat offbeat or out of place or time—but also her activism. The “displacement” of scholarship and lack of recognition around her—a function of sexism and racism—excluded Pindell’s work from many gallery and exhibition contexts, and this in turn continues to exclude her from certain critical conversations. Indeed, the presentation and institutional misrepresentation of certain bodies have been central to Pindell’s work as a black feminist activist seeking to rectify the art world’s missed opportunities. For instance, we wonder how Rosalind Krauss’s work on the grid in painting and its expansion into bodily presence could have been enriched by a consideration of Pindell’s pioneering work, or the discussion of contemporary art practices more broadly, had more artists of color been included historically in gallery and museum exhibitions. These absences have also been integral to Pindell’s activist work, and she has chronicled such lacunae within the art world with social-science precision over decades. 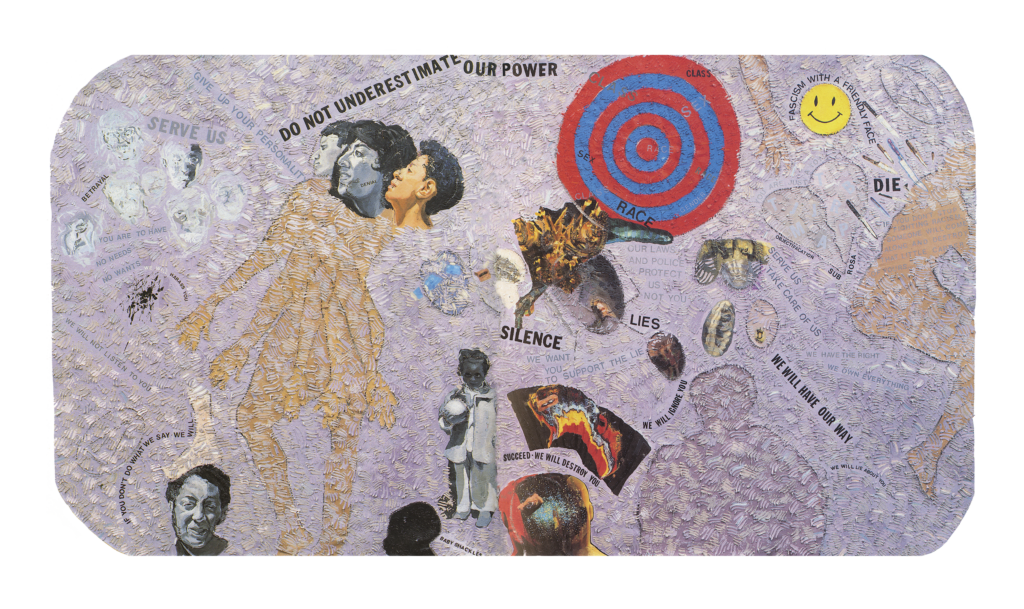 We begin this new narrative of Pindell’s work with a chronology by Sarah Cowan inspired by the artist’s coauthored timeline, “Howardena Pindell: Some Reminiscences and a Chronology,” a writing work in direct parallel with her Autobiography series (fig. 6), which foregrounds memory as social testament. Lowery Stokes Sims, Pindell’s longtime friend and collaborator, provides an overview of the artist’s moves between deconstructing and reconstructing media (painting and experimental photography) inspired by her travels and political engagements. Grace Deveney’s essay positions Pindell as an early media-engaged artist working against the passivity normally associated with television viewing. Charles Gaines explores Pindell’s works with numbers within a philosophical argument which posits that rationality and affect can coexist within the same aesthetic object. Brian Wallis recounts the development of Pindell’s politicized aesthetic voice via a deep reading of the now-iconic Free, White and 21 video installation. 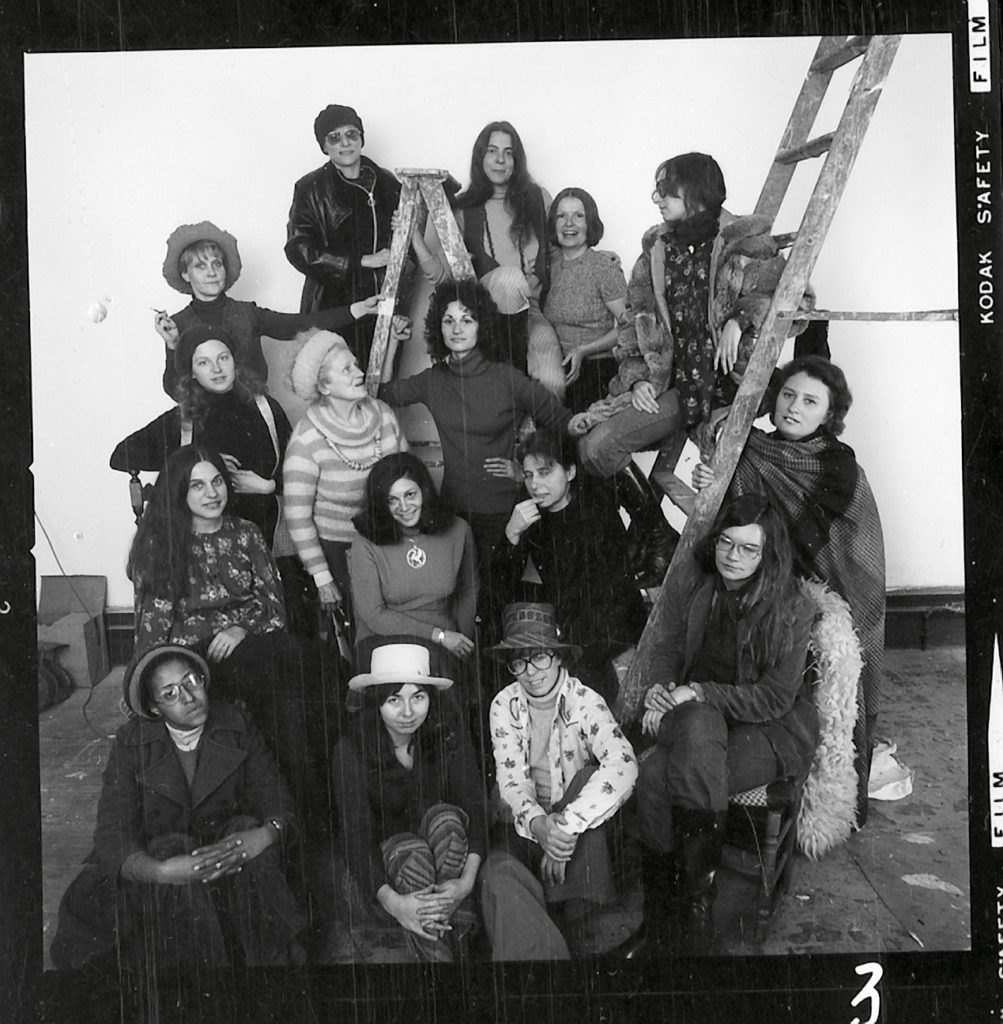 Our own essays walk through specific bodies of work alongside Pindell’s biography. And while many of these examinations are situated within the early decades of her practice, we are keenly aware of their continuing relevance as Pindell works in thematic tropes over long periods of time. As we discovered upon that initial encounter, there is thematic symmetry within the artist’s practice that arcs the trajectory of her career. This project isn’t pure revisionism for the sake of canonization. It aims to examine one artist’s creative and social output in a way that allows us to think about contemporary practices in which object making, activism, advocacy, scholarship, and self-actualization become increasingly and inextricably intertwined. As such, Pindell becomes a model for contemporary practice as well as a signifier of conflicts within different generational understandings of modes of political address. In finding her political voice, Pindell has been equally precise in her activism. She was one of the founders of the Artists in Residence (A.I.R.) Gallery at a moment when women were virtually excluded from the art scene (fig. 7), and she was involved in the Black Emergency Cultural Coalition that arose in response to the exclusion of “authentic voices” in the creation of exhibitions about African Americans. And, just as she has chronicled the lack of representation of women and diversity in museums, she has not shied away from controversy—taking on the Artists Space presentation of Donald Newman’s Nigger Drawings in 1979 and, in recent years, the postmodern strategies of work by Kara Walker.

What Remains To Be Seen demonstrates Pindell’s commitment to not only shaping visual language, but also to imagining new histories and possibilities of being in the world.